Past winners include:
Enrique Ruiz, Jim and Yvonne Hackenberg, Jennifer Lucore and Alex Hamner, Daniel Moore and Scott Moore, Kyle Yates, Aspen Kern and Simone Jardim as well as Lucy Kovalova and the fabulous Dick Johnson.
You’ll notice all our past winners are definitely great players, but you will also immediately recognize they all are very giving of their time and talents to “help pickleball grow”, which of course is the foundation of our Pickleball Rocks mission. 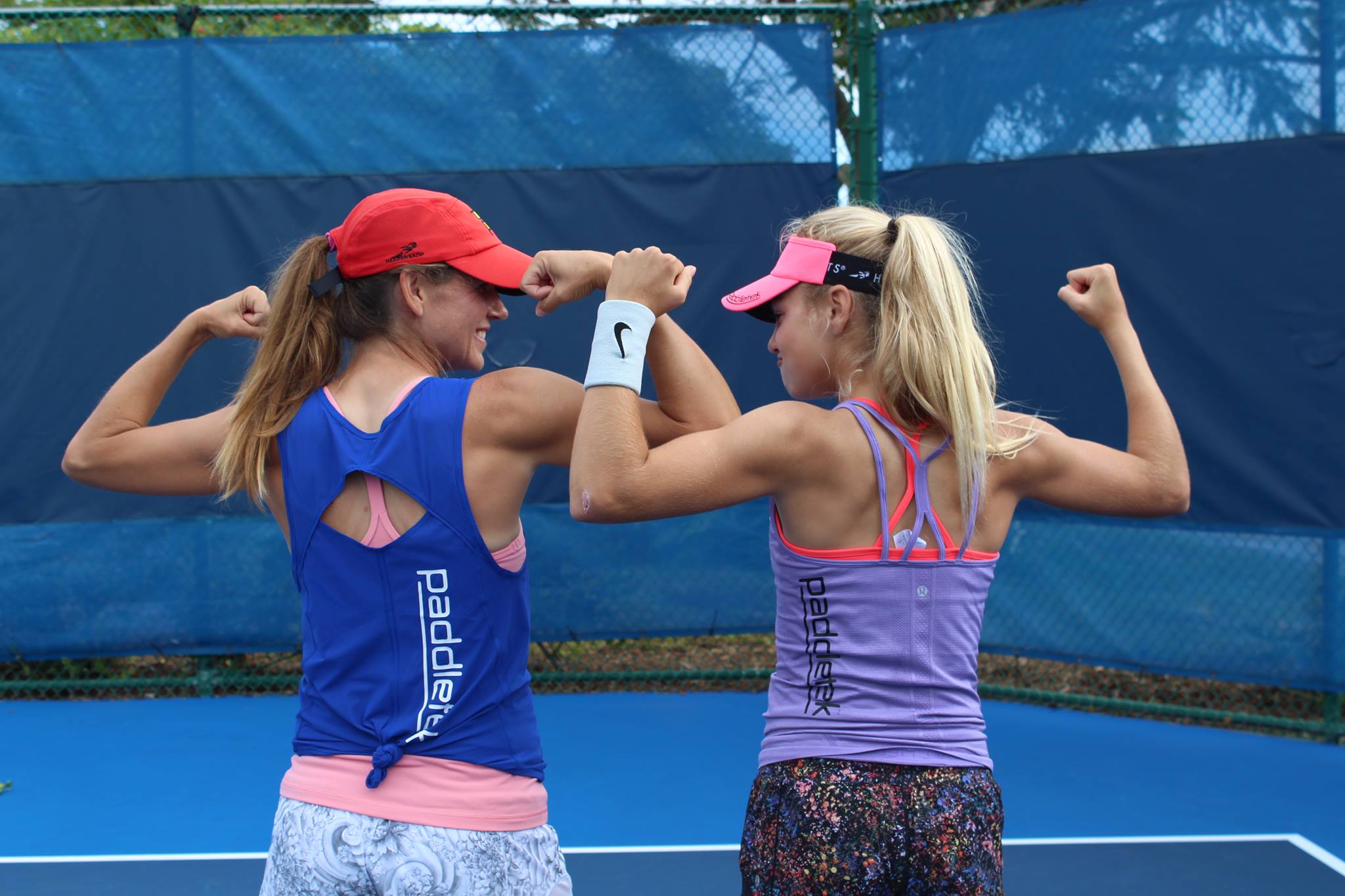 This year we are recognizing a team and an individual as Pickleball Rocks Player(s) of the Year.

As everyone knows, this was a changing year for pickleball. 15-20 tournaments now occurring every week and we cleared 3 million players in the continued player growth explosion.  So you would think it would be tougher and tougher to choose the Players Of The Year, but this year it was quite the opposite.  The voting and responses were so overwhelming for these two selections that this was the easiest choices we’ve ever made.

Our first award winner this year exemplifies all the good things that have helped pickleball become such a fun and growing sport. This team has a 12 year old who has not only caught the competitive attention of players at every level, but also endeared herself to everyone with her great attitude and example on and off the courts. Her hashtag #EatswithAL is quickly becoming legendary and she has also helped everyone easily understand how to move up the ratings ladder.  She simply started out the year at the 4.5 level and, with her mom as her partner, proceeded to beat such iconic pickleball teams as Kovalova/Tereschinko and Jardim/Carr and Parenteau/Irvine.  The UTPR computer took notice and elevated her rating in a hurry.  Nine times this year her ladies partner happened to be her mom and from all the responses we received, the pickleball world is in love with this partnership.  People loved watching the obvious positive connection and the way they worked perfectly together to win tournament after tournament, including the world’s biggest pickleball stage, the USA Nationals at Indian Wells. Besides all the people who cast their votes for Team Waters, what caught our attention, was the wonderful mother/daughter and family connection that was present every time we personally saw them on the tournament trail.  The perfect example for future family pickleball teams.

This pair entered 9 Open Women Doubles events, playing against the strongest women’s teams in the world
and came home with 9 medals:         4 Golds, 4 Silvers and 1 Bronze.

We want to personally thank Leigh and Anna Leigh for helping us all grow pickleball in the most positive ways.

Congratulations to 2019 Player of the Year: Team Waters: Leigh and Anna Leigh Waters 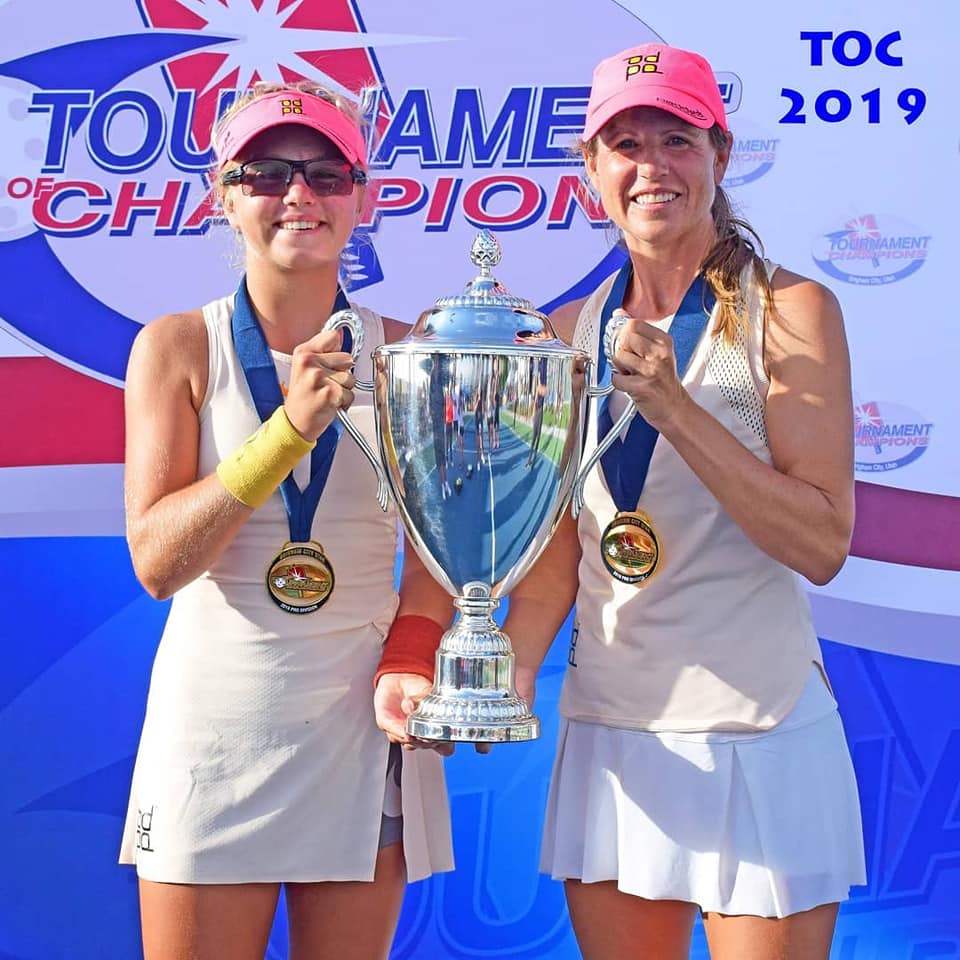 The 2019 Men’s Pickleball Rocks Player of the Year was another no-brainer.  The people who voted at www.NominateAPlayer.com simply overwhelmed the process with one name.  Ben Johns!

It is hard to believe Ben is only 20 years old because it seems like he has been around our great sport a long time.  But believe it or not, he is just hitting his stride. 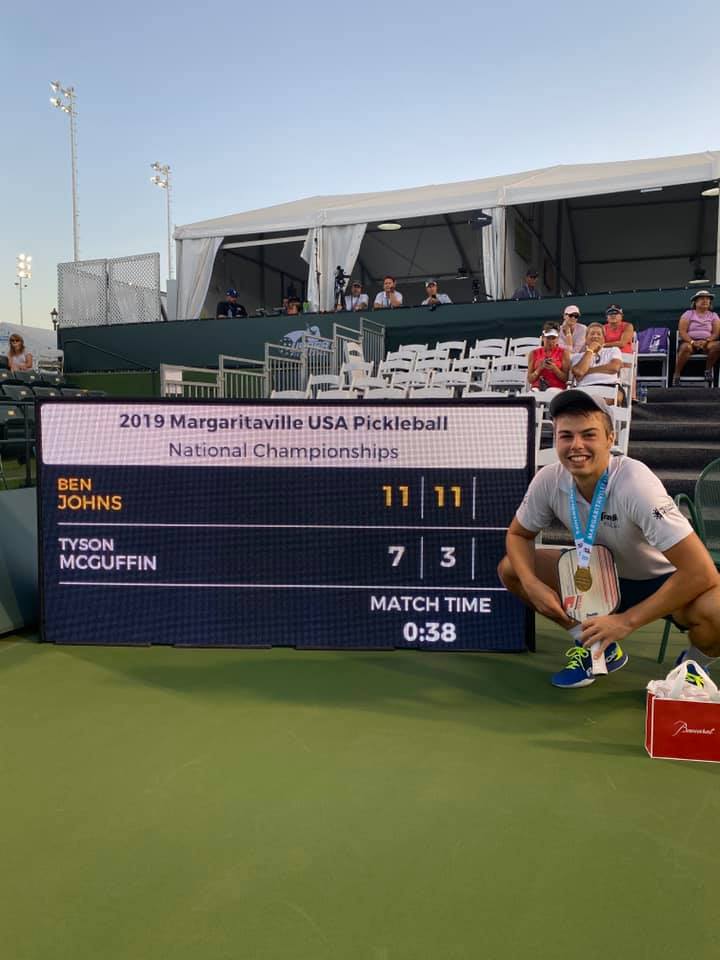 Players across the country and the world love the way he plays the game and made it clear there was no close number two this year.

In 8 Pro Singles Events, only one player was able to beat him (Tyson McGuffin – twice), so Ben came away with 6 titles, including the coveted USA Nationals Gold Medal at Indian Wells.

So we want to thank Ben for being such a great example of what a great pickleball player should be and congratulate him on being overwhelmingly selected as the 2019 Pickleball Rocks Player Of The Year!  You Rock Ben Johns! 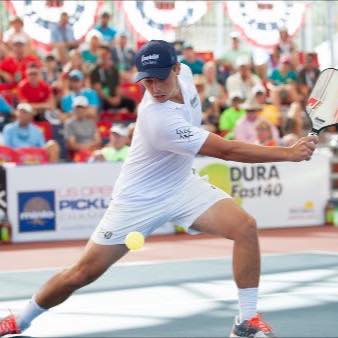 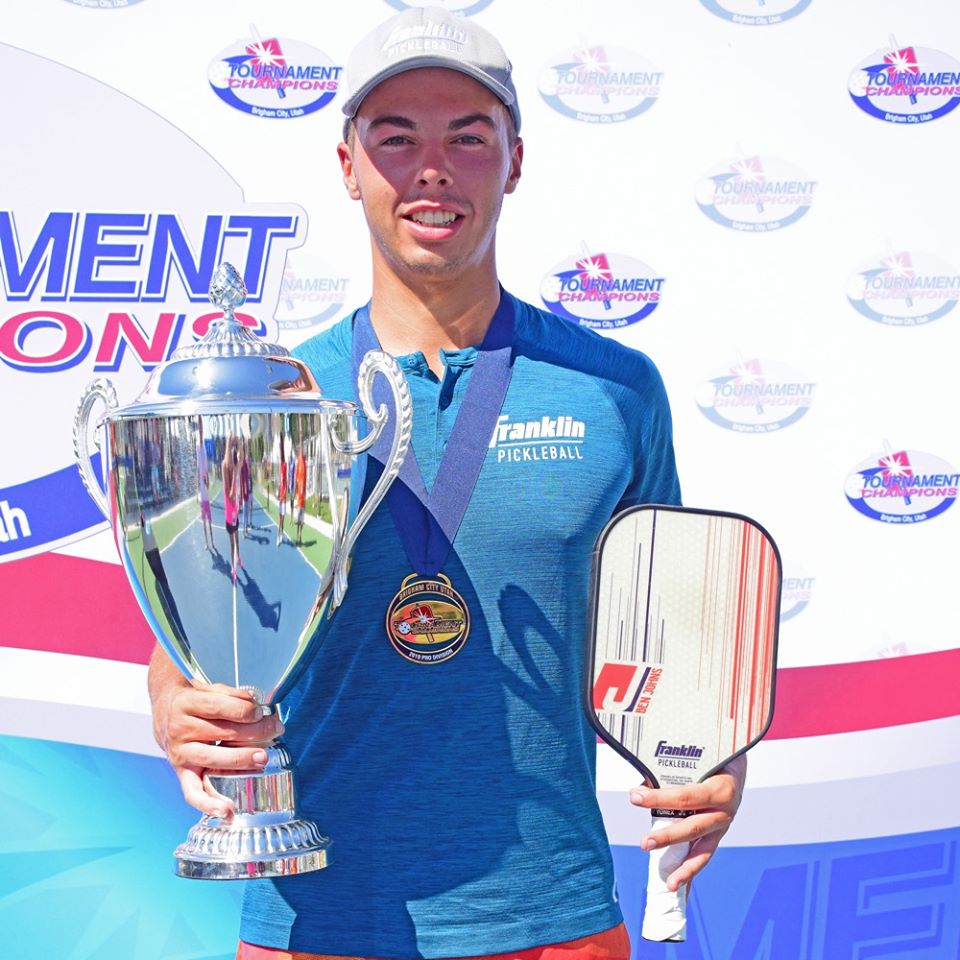 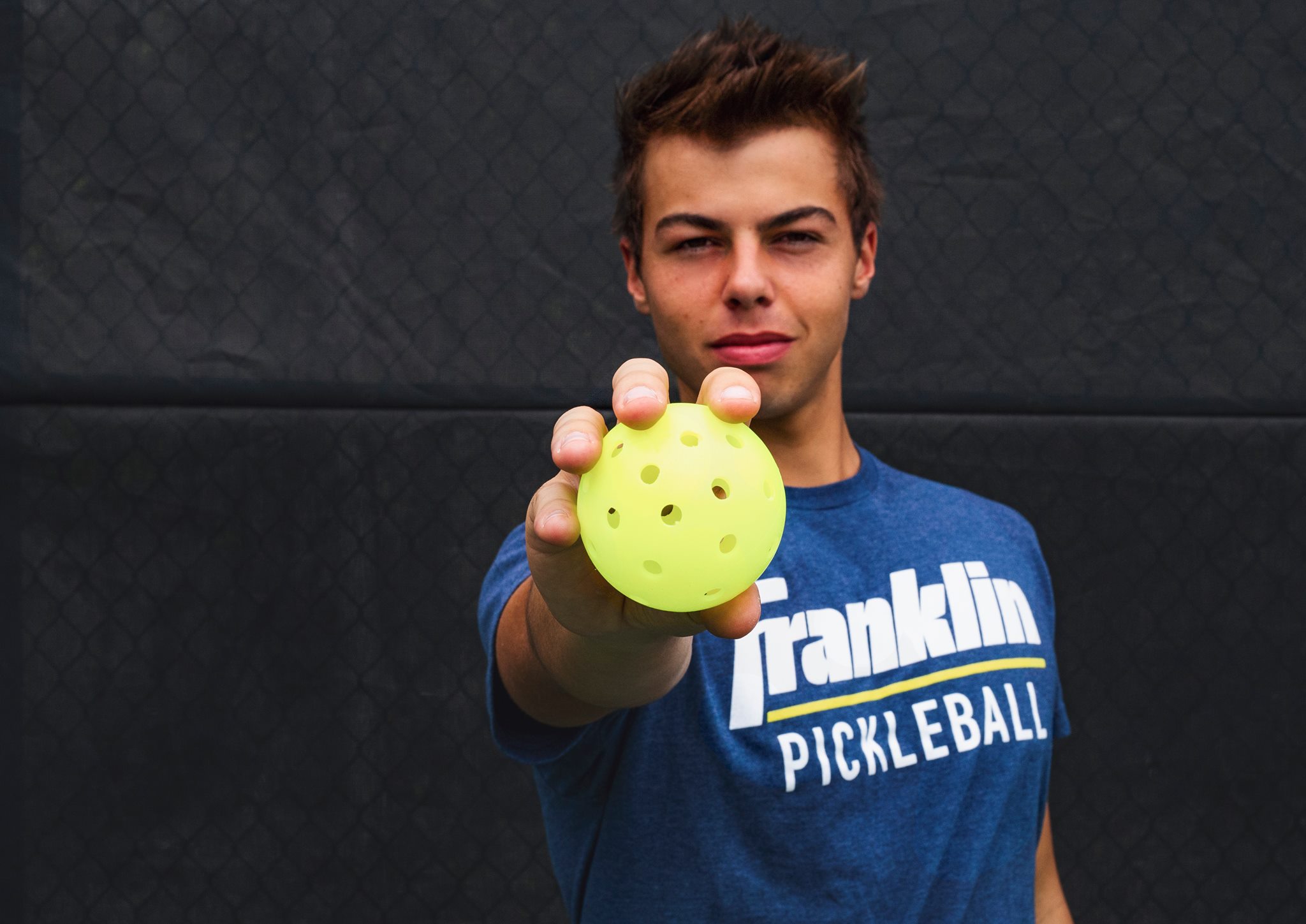 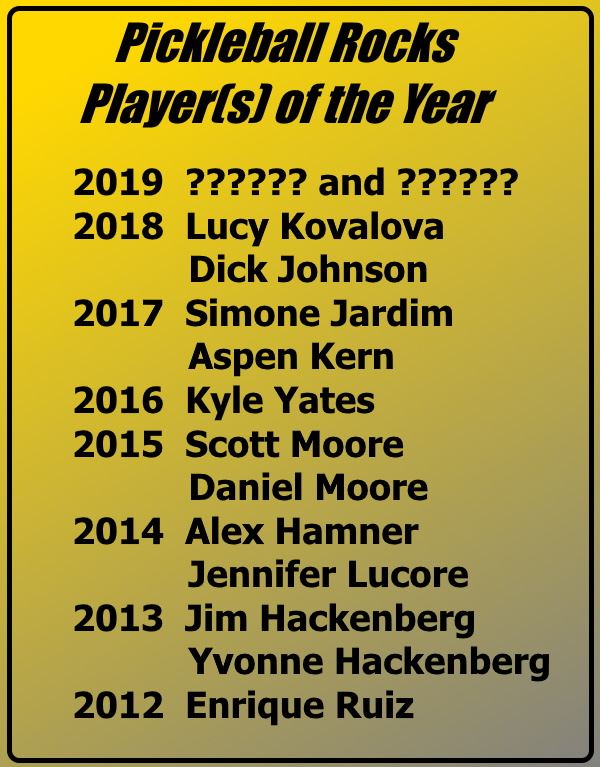