Every year it seems we set our new goals to include some form of “getting into better shape”.

We do it with good intentions, but what generally happens?  The good intentions quickly exit stage left as we go about our daily routines.   So why do we even include that goal in our list each and every year????

We do it because we know it is important.  Not only is it important that we do the things necessary to get and stay fit, healthy and strong every year, it is vital to our living our lives the way we want to; HEALTHY!

We all want to be healthy and feel great, so why don’t we???  I saw a quote recently that said “wanting a healthy body without exercise is kinda like buying a new car but choosing to not put any gas in it. The car is just going to sit there and rust.”

So what holds us back?  Well, about 9 months ago, I had my epiphany.  And as with most epiphanies, it was initiated by an event or a person.  In my case it was both.   The event was the Mid South Regional pickleball tournament in Denton, Texas and the person was none other than national senior pickleball champion, Scott Moore.

I played men’s doubles in the tournament and I still remember how tired I was after only 2 or 3 matches. I remember my game taking a serious dip in the third match, and how I hated it because I knew it was from not being in very good physical shape.   And I also remember Scott specifically asking me the very next day, “what do you do for exercise besides just pickleball?”  The interesting part of the story is that Scott had no knowledge of how I had “hit the wall” the day before.   He was just making conversation and willing to share what he had been doing to be in the top shape that he is. It was a fascinating talk indeed as Scott introduced me to something called Blood Flow Restriction training.  I had never heard of it, so I left that conversation intrigued, but the big thing that came out of it was that the conversation really got me thinking about what I was doing to try to stay in shape.

I flew home after that weekend and I proceeded to take a good long look at my own daily and weekly routines.
And quickly two things popped out to me.

Number 1: I’m just really busy so I justifed my skipping the exercise with “I don’t have the time.”  It takes time to drive to the gym and then spend 60-90 minutes on the machines.  Then there is the post workout shower and drive home.  So I was using the time excuse often.

Then I also found Number 2:  And I never thought I’d say this, but my age is starting to make it harder and harder to lift the heavy weights or workout on the machines for extended periods of time.  So I just couldn’t or didn’t want to lift the heavier weights anymore.

So after some thought, I gave Scott a call to learn more about his new training regime. I still remember him saying one line that really helped me decide to give it a test drive.  Scott said, “Rodney this has changed my life because I now can exercise with half the weights I used to use, and be done in half the time.”  So the magic phrase for me was “lift half the weights and work half the time”.  That essentially took away both my excuses for not getting in shape.

So I decided to give Blood Flow Retriction training a test drive.  And boy am I glad I did.

Not only is my fitness level and strength better than it has been in several years, the big thing I noticed on the pickleball courts is my balance. I’m now able to stretch out and get to balls that previously I wasn’t able to.  So my balance on the courts has greatly improved and so obviously my game has improved.   Didn’t think about that aspect when I started my blood flow restriction workout bands, but so happy to be able to move confidently around the courts again.

Blood flow resistance training has been used by high level athletes for decades, but only recently has the technology been available to “regular” people like us.

So I’m telling the world, if you want to look at a new way of getting or staying in shape and spend half the time doing it, I wholeheartedly recommend taking a test drive like I did.

Simply pick your fitness goal below and CLICK TO LEARN MORE.

You’ll be soooo glad you did.

Your friend in pickleball, 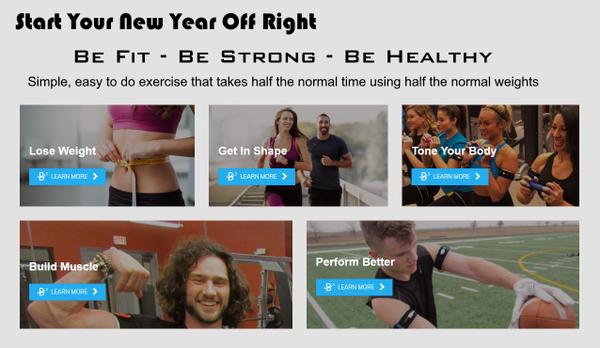 When you take the 30 Day Test Drive you will get to try and experience all the benefits of using Blood Flow Resistance Training.

Here is what you get while on the 30 day Test Drive:

A B3 Bands Exercise System

A Gym in a Bag B3 Back Pack

A B3 Shaker cup

Choose a 30 Day Fitness Program that fits your personal goals:

And on the 30 day Test Drive you get a 30 day supply of one of the four Fitness Nutrition products listed below.  You choose which one you’d like to try that fits with your personal goals.

My personal favorite is B3 Meal.

Last year, Scott Moore encouraged me to take a 30 Day Test Drive to see what blood flow restriction training was all about.   I am so glad I did, and I encourage you to try it too.

Get your daily exercise in half the time using half the weights and getting full results.