My brother Zack and I just returned from playing in the Grand Canyon State Games  in Sun City Arizona.  Wow, what an awesome experience!  We left on Wednesday afternoon from Indianapolis and flew directly to Phoenix.  When we got off the plane we couldn’t believe that this was Arizona.  It was raining and a cold 44 degrees!  We didn’t leave Indiana for this!  We drove over to Happy Trails where, thanks to midwest pickleball legend Don Walker, we would be staying for the rest of the week and got settled in.

Thursday was Age Group doubles.  Zack and I played in the 19+ age division.  Our first match was against the eventual champions, Aspen Kern and Chris Miller.  It was a fun match to play but lets just say we were no match for them.  After the first match we settled down and ended up getting the bronze medal.  Not bad for two guys from Indiana who haven’t played outdoors in a few months! 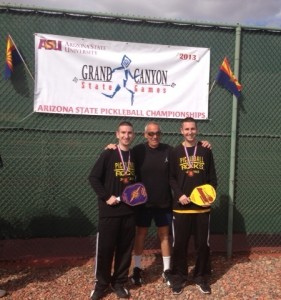 That night we celebrated by hanging out with one of our old roommates from college, Justin Masterson, who now pitches for the Cleveland Indians.  He is down in Arizona for spring training with the team.  It was great to catch up and hear some stories about being a major league baseball player.  Wishing him a great year with the Tribe.

Friday morning was the start of Mixed Doubles age groups.  Zack and I didn’t bring our partners (our wives) on this trip so we hung out at the Pickleball Rocks booth all day and watched some great pickleball.  After almost five hours of playing mixed doubles, a group of players invited Zack and I to play over at Happy Trails later that night.  When we showed up we couldn’t believe all the players that showed up to play.  It felt like the All Star game of pickleball.  There were too many great players to name but National Champions Steve Wong, Mark Friedenberg, and Enrique Ruiz were just a few of the players we got to play with and against.

After a great night of hanging out with the worlds best pickleball players, we had to get ready for the Men’s skill level tournament.  Zack and I were playing in the 4.5 skill level tournament.  We started off a little shaky, winning a close one 11-8, 11-8.  That would turn out to be the closest match we would have all day.  From there it was one of those magical days.  We finally started to pull everything together.  We went on to take the gold medal without dropping a game.  I think it is the best that Zack and I have ever played together.  The only thing that would have made it better was having our family out there to watch us.  Thanks Dad for sending us out for this one. 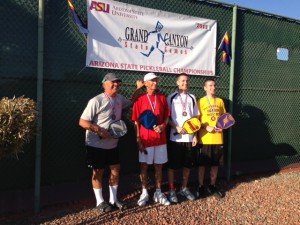 After receiving our medals and taking some pictures, we were off to celebrate.   So how do you celebrate in Arizona after being at a pickleball tourney for seven hours?  Right! You go play more pickleball!   We grabbed a quick bite to eat with our good friend Stephanie Lane and headed back over to Happy Trails to play even more!  Our good friend and noted pickleball coach, Prem Carnot said that when you are in Pickleball Heaven you might as well play pickleball!

Arizona is truly pickleball heaven.  We met a lot of great people and got to play a ton of pickleball.  Hopefully this tournament becomes a yearly trip for us.  Maybe next time we will take the Rocket with us!